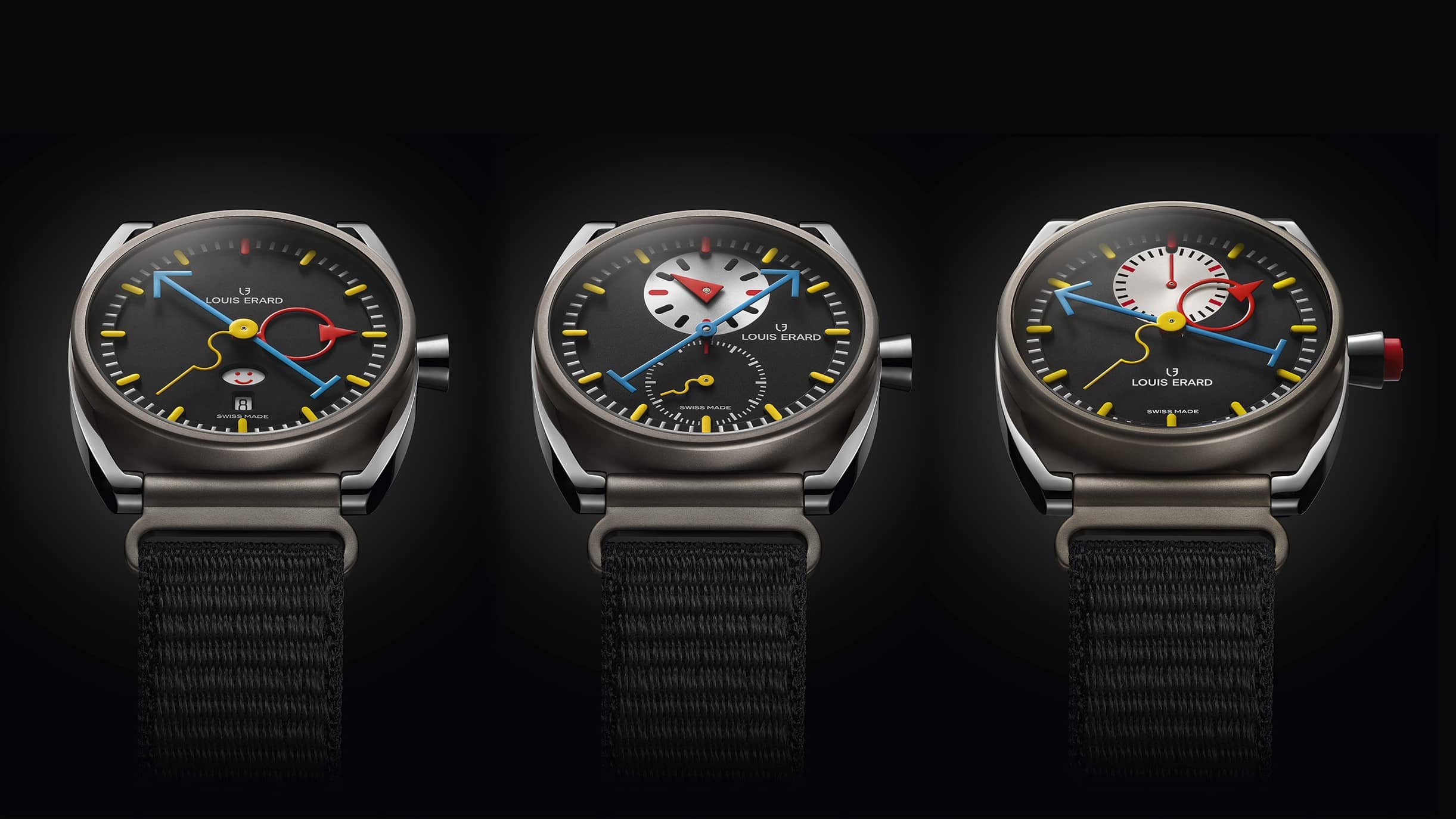 Louis Erard x Alain Silberstein. Pushing the boundaries of its artistic design even further, Louis Erard reveals a completely unique triptych. Alain Silberstein was given carte blanche, designing the series of three watches like a picture over three panels to make a whole work of art. This is an unprecedented combination of high-end watchmaking and accessible watches. Three lots of 178 models with an entry price of CHF 3,500, and a collector’s box at CHF 11,111.

In 2019, Alain Silberstein revisited ‘Le Régulateur’ from Louis Erard, a historic, emblematic model produced by the Jura brand. This collaboration resulted in an exceptional model: two series of 178 models which sold in just a few hours and were immediately extremely sought after on the secondary market. And all this even before it was selected for Geneva’s Grand Prix d’Horlogerie and it received an award in the Red Dot Award: Product Design 2021.

2021 marks a new frontier in the collaboration between Louis Erard and Alain Silberstein, with the launch of this triptych. Three watches as work of art; three family members able to shed new light on Alain Silberstein’s artistic approach, as well as Louis Erard’s watchmaking mastery. Each item is limited to 178 models, 78 of which are to be sold in a collector’s box containing the entire capsule as well as a digital artwork signed by the artist. The retail price makes a very strong statement: an entry price of CHF 3,500 and the collector’s box at CHF 11,111.

By purchasing Le Triptyque Louis Erard x Alain Silberstein collector’s box set, the 78 privileged owners will also be able to enjoy a personal, non-fungible token linked exclusively to their triptych. This guarantees and protects the authenticity of the limited edition, as well as containing all its technical specifications. In addition, collectors will have the opportunity to customise their digital token with a private message, making it even more unique and timeless.
Louis Erard is one of the first in Swiss watchmaking to offer such a technology, and this can only be offered thanks to Qiibee, which already partners with the brand for its loyalty program.

Everything begins with the case, a blank canvas for the artist. It consists of a frame with vertical sidebars called “brancards”, flanked by a conical crown. This is architecture in pure form, each element perfectly held, resulting in geometric simplicity and effects created by contrasts, shapes, materials (grade 2 and grade 5 titanium) and finishes (microblasted and polished). Water-resistant to 100 meters, the case is further complemented by a nylon strap with a flap, guaranteeing uncompromising comfort. Soft, breathable and lightweight, the strap features a quick-fit closure, while the tight mesh of the double-layer nylon forms a surface that won’t retain moisture. Against this canvas, the designer offers his exercises in style: three movements, three functions, three stories.

The triptych begins with a reference to the artist with the La Semaine Louis Erard x Alain Silberstein. With its three hands, date and day, this model features the exquisite weekly planner developed by Alain Silberstein, easily recognisable as his work: the days do not have names, but rather playful smileys – small, stylised faces symbolising different moods and reminding us that time is a flow, an experience, an emotion evolving through the days. From grey Monday to radiant Sunday (or vice versa), depending on the mood of the wearer!

The central piece is a new variation on the regulator: Le Régulateur Louis Erard x Alain Silberstein II. Once again, the designer’s signature touch is instantly visible: a large blue arrow hand for the minutes, a red triangle for the hours, and a small yellow serpentine hand for the seconds. Telling the time becomes separated into its different parts in a joyful language, sophisticated and childlike at the same time, with the artistic and philosophical depth that characterises all Silberstein’s work: it is a game of proportions, with references ranging from Bauhaus to the rich history of watchmaking.

The third part of the triptych is an all-new chronograph design from the guest artist: Le Chrono Monopoussoir Louis Erard x Alain Silberstein. It features centrally placed hour and minute hands, with the chronograph seconds hand at the centre and a 30-minute counter at 12 o’clock. As on the La Semaine model, the monopusher chronograph incorporates the designer’s new signature hour hand: a red circle pinned with a triangle.

“A watch is a search for harmony,” says Alain Silberstein. “Just like a choir or philharmonic orchestra, where you rehearse until you find that certain something, the crystallisation. These watches are made to awake the inner child within all of us, and my work is only really finished when they make someone smile. Without carte blanche from Louis Erard, it would have been impossible to succeed in this goal.”

More creations will follow with other guest creators, each produced in a limited series of 178 pieces, a symbolic number which signifies that we are stronger together.